Blau is a leading pharmaceutical industry in the institutional segment and a pioneer in biotechnology, with a proprietary portfolio of highly complex drugs focused on relevant segments in the industry, such as immunology, hematology, oncology, nephrology, specialties, antibiotics, working in several therapeutic classes.

Blau has a continental footprint , present in 6 countries – Brazil, Argentina, Colombia, Peru, Uruguay and the United States – and has a state of the art pharmaceutical industrial complex, composed of five industrial plants, with cutting-edge technology, dedicated to the production of biological medicines, biotechnological, oncological, antibiotics, injectable anesthetics and biotechnological inputs.

Blau’s portfolio consists of high-complexity drugs with own brands – biological and synthetic – for the hospital segment.

The Company is divided into 4 business units: biological, oncology, specialties and others.

Biological products are drugs produced by biosynthesis in living cells, unlike synthetics, which are produced by chemical synthesis. Biologicals are a diverse and heterogeneous class of products that can be made using raw materials from two different origins: a) medicines obtained from biological material that are extracted from microorganisms (alive, attenuated or dead), organs and tissues of origin plant or animal, cells or fluids of human or animal origin; b) medicines obtained by biotechnological procedures, which are recombinant proteins obtained from genetically modified cells; monoclonal antibodies.

The oncology line is composed of oral and injectable drugs of different origin, intended for the treatment of cancer, which encompass several therapeutic classes and types of treatment.

The line of specialties consists of products that are used in the hospital’s daily routine, in most specialized treatments for infectious diseases, special treatments, among others. It includes antibiotics, muscle relaxants with therapeutic applications, injectable medications, anesthetics, among others.

The line of others is made up of prescription drugs, non-prescription (MIP), focused on the (retail) and non-retail markets , including dermo-medicines, condoms and the like.

Blau operates mainly in the Institutional segment, which includes hospitals and private clinics, including chemotherapy and hemodialysis centers, in addition to public health institutions at the federal, state and municipal levels.

For this reason, the choice for consumption is made within health institutions and / or clinics and hospitals, and is generally related to safety in terms of the ability to minimize the risk of adverse reactions related to consumption, the quality of the medication itself, health professional confidence formed in relation to therapeutic effectiveness and the price that is also taken into account by health institutions.

The companies operating in the institutional market focus their sales efforts on hospital, outpatient and medical clinics, with the indirect contribution of the network of distributors to effect the sale and delivery of the drug to the consumer. For this reason, these companies maintain smaller teams to carry out their sales activities, which also reflects the lower use of financial resources in marketing and dissemination strategies, when compared to the retail market.

Sales in the institutional market are expected to grow more strongly as the economy strengthens, as public spending on health is linked to GDP at the federal level. With the improvement in economic growth expected for the Brazilian economy, this scenario should be strengthened.

In addition, recent Brazilian political and economic advances, such as pension reform, should lead to clearer health policies in Brazil, in order to improve the infrastructure of the Unified Health System (SUS) and facilitate the entry of new medicines in this market.

The Company currently has a wide portfolio of injectables, used in hospitals, clinics and HMOs.

Considering the Company’s business units described above, on December 31, 2020, the Company’s drugs were traded with more than 7 thousand hospital chains, more than 5,000 hospitals and clinics, more than 300 oncology clinics and more than 300 medical centers. nephrology, according to data from IQVIA. As a result, the Company had a market estimated at more than R $ 4.7 billion, which has renowned and diversified brands, as shown below: 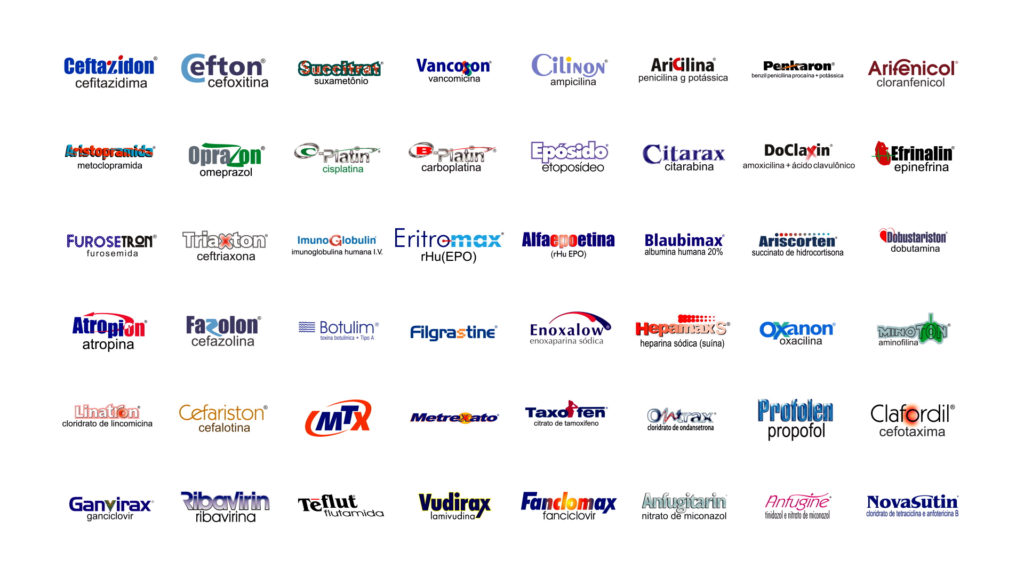 Blau has an industrial complex composed of 4 different locations: